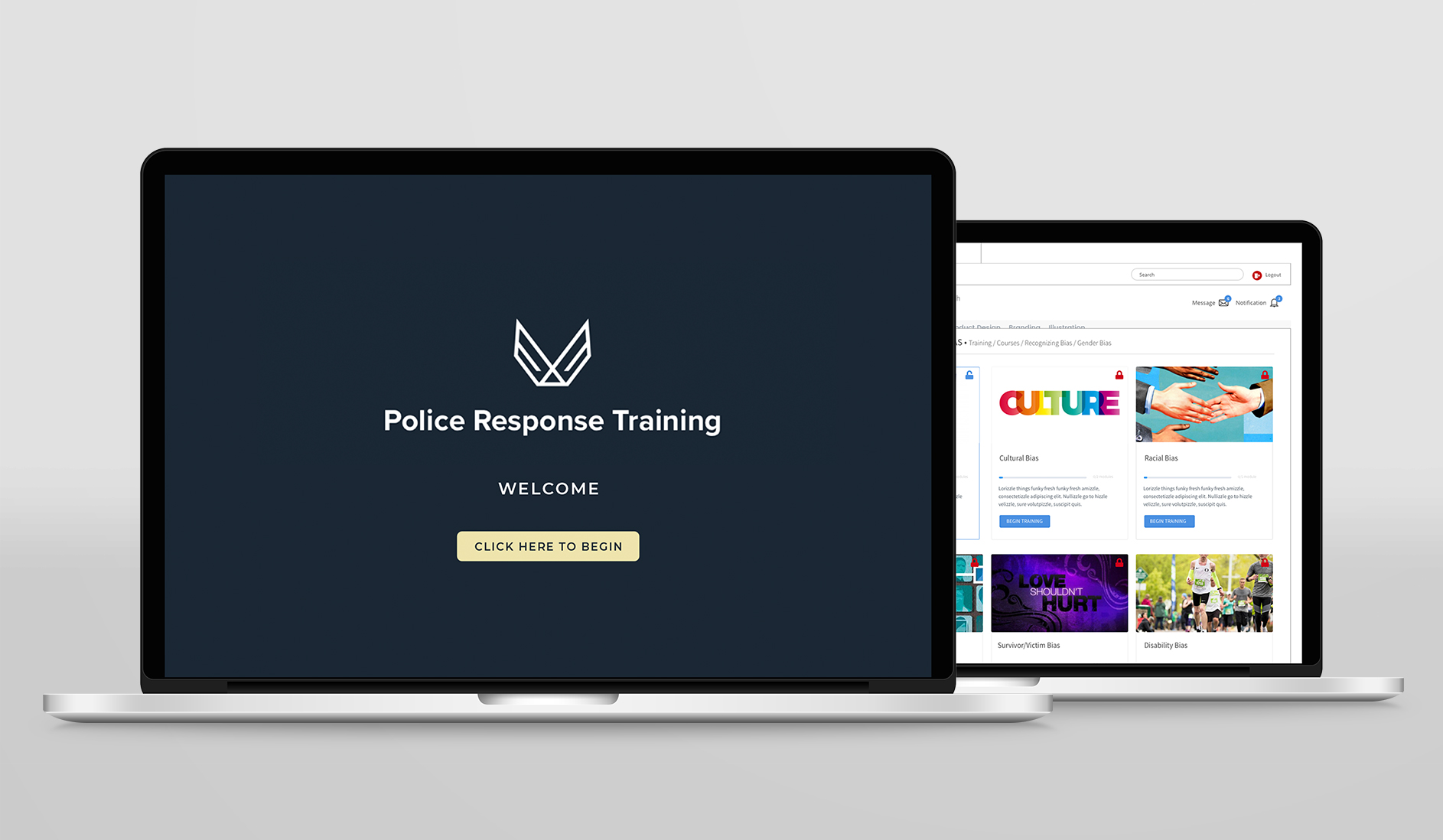 Below is the Final prototype of the Police Response Training Modules portal.

This training module would be a portal that is within each Police precinct and it collects data for metrics for the police chief to receive and to promote more use of this portal and training.

The training would be updated regularly and be used in tandem with a livestream roundtable to further discuss and the information to really make a difference in officers’ lives and to improve the reporting, accountability and victim-centered interviewing/questioning and sensitivity.

The prototype in action can be viewed here:

Who are we targeting with our design solution?
(This should be at least alluded to in the Objective section and then further described here.)

Personas describe the type of person we are designing this for. Include full persona documentation (based on empathy mapping) or at least an overview of each persona plus links to the complete diagram/visual for this persona. Our design concept is geared toward Law Enforcement Agencies in a Global sense.

For this project, we are focusing on Georgia and Mongolia where the policing guidance has just started to be adopted after Domestic Violence was recently recategorized as a crime against the human rights of a person regardless of gender, race, ethnicity, religion, sexual orientation, social status, and disability.

The concept was to create a Training Portal that would be available for trainings for all officers, trainers, chiefs, all new hires, advocates, lawyers, etc.

This training would be available at all precincts as part of their mandatory training and it is a tool that is focused on education about trauma, cultural sensitivity, bias, primary aggressor, police culture, interviewing, and more. The portal would contain introductions, training material with videos, explanations, and followup trainings.

This is the proposed Site Map for the Training Portal Modules.

There are 5 main topics:

Within each Section, it is broken down as:

Scenarios or stories about the ideal user experiences explain how the product fits into each persona’s life and environment, and how it helps them achieve their goals. You should have at least a couple scenarios for each persona.

We came up with 3 different scenarios of how this product would actually be used by our two personas. One is about a new officer who has just been hired receives an email telling him to take the training. One is about a police chief wants to see how the training is going. The other is about when an officer is caught being biased.

Jerry is a newly hired police officer. He received an email saying that a mandatory training about Domestic Violence and Sexual Assault would begin next week. In the learning center of police station Jerry was taking courses about DV and SA given by instructors and websites. He was working hard in the process of training, and after two weeks he received an email saying that the training is completed, and he had passed the final examination.

Scenario 3 • Officer is Caught Being Biased

Here the scenario is that an officer is doing an intake interview with a victim and she’s clearly shaken up. He notices that the story she’s telling is not cohesive and immediately makes a bias thought against the woman. His chief comes up and asks about the case. The officer says: “This makes no sense, it sounds made up. Did you see what she’s wearing?” The chief immediately recognizes the bias and calls him into his office.

We had a discussion with law school students, shared stories from different aspects. Written on post-its, information, stories, ideas, and insights were gathered and sorted into themes to provide a better overview of the situation.

Looking at all the concepts we came up with on the Affinity Mapping, we see that the issue itself is very complex. There are so many angles we can see from just this mapping. There is the agency angle, where they need additional resources to help Law Enforcement Agencies train better officers, hold them accountable and implement these trainings to better serve domestic violence and sexual assault victims. What are the different categories in these cases, implement training about stereotypes, change agency culture, run pilot projects, develop better response systems.

Then there is the victim angle,  and how they are perceived, how they are treated and what resources are they served with when they have to go through the legal system and for example, their significant, other who is the perpetrator, is the breadwinner in the home, how are these victims provided for after their source of income is incarcerated. Where do these women go, what do they do next, can they come back home? there are many unanswered questions here.

Then there is dealing with societal stereotypes, shame, blamed by family members, blamed by the police, unspoken acts of violence and so much more. The plan is to reinvent the way the police deals with a situation and prevent “Revictimization” of the survivor through good reporting and follow-up.

We also looked into what resources are available and what can be improved:

Our 2nd assignment for this class deals with a sensitive and tough subject matter: Domestic Violence and Sexual Assault. The goal is to propose design solutions to further UM’s School of Law’s COURAGE in Policing Project’s work to “identify good practices and increase accountability” regarding domestic violence and sexual assault, both in the U.S. and globally.

Our team is looking in to the Global scope of the issue. We are assigned to Georgia and Mongolia, two countries that are implementing the guidance of the Department of Justice’s Guidelines for Identifying and Preventing Gender Bias in Law Enforcement Response to Sexual Assault and Domestic Violence as a result of domestic violence,. This guideline was released by the U.S Department of Justice (DoJ) in December 15, 2015.

The guideline has 8 major points that examines how gender bias can undermine Law Enforcement Agencies (LEA’s) response to sexual assault and domestic violence and provide a set of basic principles that — if integrated into LEA’s policies, trainings and practices—will help ensure that agencies’ efforts to keep victims safe and hold offenders accountable are not undermined, either intentionally or unintentionally, by gender bias.

On October 11 one of our assignments was to watch the documentary Home Truth which is based on a real-life tragedy of Jessica Lanahan’s children’s death at the hands of their father almost 20 years ago. The documentary tells the story of Jessica, who experienced a parent’s worst nightmare when her three young daughters were killed after being abducted by her husband in violation of a restraining order. After 5 phone calls and 3 visits to the police station, her calls and please were not taken seriously and this tragedy could have been prevented had there been no bias toward her as a domestic violence victim.

The documentary sheds light on the realities of Law Enforcement’s gender bias in policing domestic violence and sexual assault. After so many years, were they able to shift their old ways of thinking about how police respond to these kinds of calls and situations.

For our interviews, we had to coordinate with Anabel and her class schedule as well as our own. For Bayaraa, we made some attempts to interview her through the phone, and video, but finally were able to connect with her through Zoom meeting on the phone only.
For Tamar, we haven’t been able to get in touch yet, since she was on vacation. We will reach out today to send her some interview questions.

These women are in the group of Advocates. We were only able to reach these women since we do not personally know anyone in the police department, or any justice court or service community.

Here are the questions we prepared ahead of our interview.

The interview with Anabel went on very nicely more like a conversation. She was giving us a background about the COURAGE Policing Project here in the University and how it’s a year-long class that they take as an elective.

We learned that the COURAGE Project is implementation in practice.

Anabel informed us that one of the best ways to gather information is through surveying and that they’ve gotten some good responses from surveys done with Law Enforcement and responders outside of LEA.

She mentioned that it is essential to retrain police officers in how they respond to DV and SA calls, they are the first responders and they need to be trained in these traumatic situations to be more victim-centered and to deal with these traumatic experiences and how they treat, question/interview victims and what resources are they sharing with victims after they have placed a report.

Anabel also informed us that Georgia is trying to be part of the European Union and they are doing their part to implement the current policies on policing similar to other European Union countries to be up to par with the rest of the countries in this area of Law Enforcement.

Anabel mentioned the existence of the CEDAW – the Committee on the Elimination of Discrimination Against Women – which is the body of independent experts that monitors the implementation of the Convention on the Elimination of All Forms of Discrimination Against Women. Countries that have become part of the treaty are obliged to submit regular reports to the Committee on how the rights of the Convention are being implemented. The CEDAW outlines many situations where there has been bias or violence against women and it’s a toolkit to review and it explains some of the existing programming that is present and what challenges there are along with new opportunities to rectify behaviors and these existing programmings.

We learned that in the countries assigned (Georgia and Mongolia) the culture in these countries is one of patriarchy that is very much present and predominant in every area of society.

Data tells us that the amount of cases being opened, most of them end up being dropped due to the bias within the justice system and they don’t like to handle Domestic Violence cases. We are told that this is because there is a culture of SILENCE in which women just don’t report these cases because they say they are discriminated against for not keeping their men happy.

Bayaraa also told us that the level of education of the women there is almost 100% and this adds to the complexity of the matter because of this, men subconsciously  feel a level of anger and frustration so they take it out on the women.

The subject of domestic violence is taboo within the middle class and they don’t tell on their spouses or partners. There are many statistical anecdotes about domestic violence and between social classes as well but they are just not reported.

Despite the law, Bayaraa said that the importance is to change the mindset of bias which is where we could come in, exploring tools to identify these biases, document and prevent these biases.

Educating law enforcement in the critical skills they need to identify biases within the force and precincts, exploring individual bias, exploring institutional bias and retraining people as to how to report and have accountability.